Meera and i had a very quick lunch at the BBC today…. 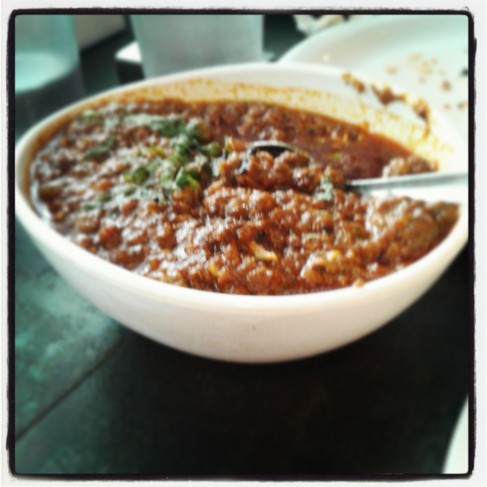 No not the British Broadcasting Centre but Borivali Biryani Centre. Actually no one would really think twice about eating in this place because it is known for its biryani. But frankly i don’t care much for their biryani because it is very spicy and has too much oil. But it is somehow famous for that so it kind of is the main item on their menu and people order just for that.

Now the quantity they give you is too much for one person to eat and taking a doggy bag of biryani isn’t quite appealing to me, for reasons stated about – it is too spicy. So thanks to Meera i tried their kheema ghotala with naan.

Now why thanks to Meera? Meera is vegetarian with a unique taste for food…she wanted to eat lachcha paratha and kulcha with raita. Being at BBC, surrounded by meats, i chose kheema ghotala over the limited choice of vegetarian food they had on menu – consisting mostly of mixed vegetables and paneer.

The ghotala was very well prepared actually. I was pleasantly surprised to find their naan very delicious too. There was too much oil in the ghotala (which i guess you cant escape) but really i liked how it tasted. And i did not mind doggy bagging it either. In fact the taste of the ghotala negated any negative comments that i want to actually make about the ambiance (including the crowd) and the service at the outlet. One other thing that probably will make me go there is the price – a meal for two cost us …wait for it…only Rs 400 🙂

So i have a new menu now when i am forced to eat at the BBC. Kheema Ghotala with Naan for the win!